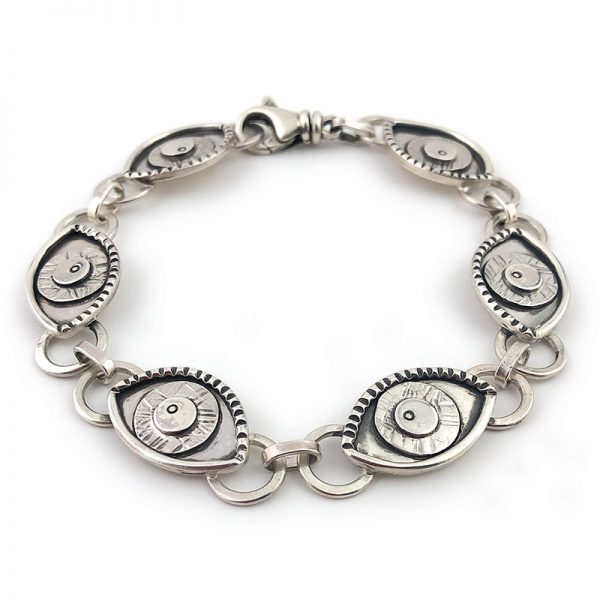 Take protection with you wherever you go.

Take protection with you wherever you go.

Wait. That didn't quite come out right. Let's try again...

For centuries evil eyes have been used as symbols of protection all over the world. This sterling silver version is a new take on that old, timeless theme and now you can have it with you no matter where you are.

What’s so special about it?

The Story Behind the Eye Jewelry

Basically, the story goes: I’m obsessed with eyes, and it seems like a lot of the rest of the world is, too. So they are the subject of my Signature Collection and will always be a part of my offerings.

Some examples of eye of protection motifs…

In Greece the evil eye is also known as a Mati. The evil eye is actually a curse that is cast by a glare backed up with negative intentions. It is said that wearing a Mati prevents the curse from happening.

In Egypt it’s the Eye of Horus, or Wadjet. It is also known to provide protection, but also is said to promote good health. In ancient Egyptian lore there is a story about Horus’ eye being ripped into six parts but later restored and believed to have healing properties. Talimans were made, and worn, with the Eye of Horus for that reason.

The Masonic eye represents the Eye of God, and symbolized God watching over the universe. They borrowed the symbology from ancient nations who went before them.

I could go on and on. Do a google search for any region, culture, or group and I bet you find something to do with eye symbolism. Regardless…this bracelet has you covered.

See what people are saying, and why they keep coming back for more.

Measure wrist size with flexible measuring tape, (or gently wrap a string around your wrist and then measure the length. Add 1/4" to your wrist size, or more, if you'd like to to drape more loosely.
This silver jewelry set has a light patina on it that rests in the cracks and crevices and serves to give each design a little more definition and pop. A complimentary cleaning kit is included in every order. Replacement or additional kits can be purchased here.

For deeper cleaning use a mild soap or detergent.

To remove any tarnish that may occur, use enclosed Sunshine Cloth.